The recommended method is to use a Samba Chimney:

Fill the space under the Samba Chimney Starter with 2 -3 Samba Firelighters, then fill the chimney starter with briquettes.

Through the holes in the base of the chimney starter, light the firelighters under the rack.

Approx 15 – 20 minutes after lighten, when the charcoal is fully burning and the grey ash covering appears, put on heat proof mitts and safely pour coals into your desired location.

Spread several Samba Firelighters on the base grill of the barbecue and arrange Samba Coco Shots Briquettes in a pile on top of firelighters.

Light the pile in several places with Samba Safety Matches or a Samba Gas Lighter and wait up to 25 minutes for Samba Coco Shots Briquettes to turn ash grey or fire red – leave barbecue vents open.

Evenly spread Samba Coco Shots Briquettes with tongs into the desired location on the grill.

YOU ARE NOW READY TO GRILL! 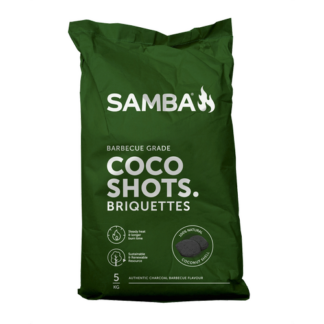 Join our mailing list to receive the latest news, deals and weekly specials direct to your inbox

You have Successfully Subscribed!